The history of Schäftlarn Abbey goes back for more than 1250 years. Founded in 762 by Benedictine monks, it was a Premonstratensian monastery from 1140 until the secularization in 1803. In 1866, King Ludwig I of Bavaria restored possession of the buildings to the Benedictines, with a mandate to devote themselves to the education of young people. Currently, there are 10 monks who live, pray and work in the abbey.

In line with the foundation’s mandate, a secondary school with day care center and boarding school as well as numerous commercial enterprises are situated on the premises.

Further information about the monastery, the Order of Saint Benedict and the tasks of the monastery can be found on the homepage of Schäftlarn Abbey.

Schäftlarn SPA
It is commonly unknown that Schäftlarn has an old tradition of healing. On April 1st 1803, on orders of Napoleon, the former monastery of Schäftlarn was secularized and dissolved. The buildings and grounds were purchased by Johann Michael von Pachner, a paper manufacturer from Munich. He made use of the alkaline mineral springs above the former rectory, after doctors and chemists attested promising results. In 1807 he opened a therapeutic bathhouse in the former monastery, much to the delight of Munich’s people. In 1845 the English Maidens purchased the monastery grounds, including the bathhouse and operated it until they sold it to the Benedictines in 1866. Under the first two priors, the bathhouse visitors were mainly comprised of clerics from Munich. The Benedictines closed the facilities in 1884, when they needed the facility and manpower for their newly opened Gymnasium (secondary school). The monastery privately used the springs until the 1990’s. 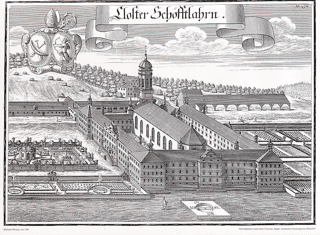